What is an INVASION CHALLENGE?

Hades has opened the gates of the underworld… The first INVASION CHALLENGE is about to begin!

In an Invasion Challenge, you will be tasked with defending each city’s Temples against a growing army. 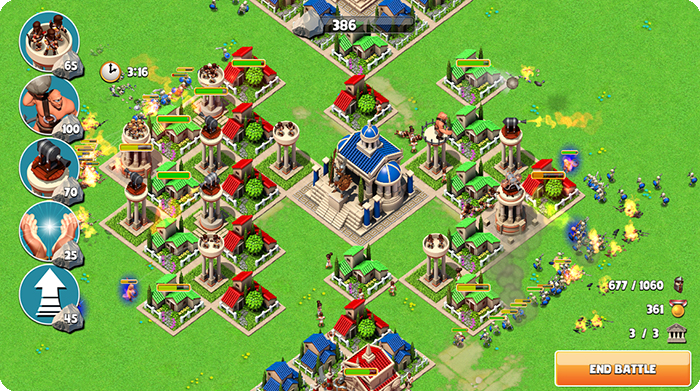 Each Round begins with a small number of resource points that you can use to place your first defenses as the invaders approach.

For every enemy you defeat, you’ll be awarded extra resource points that you can use to place, upgrade, and heal defenses in real-time.
Subsequent uses of each tower or ability will increase in cost, so manage your resources wisely!

Defeating more enemies will also increase your score – some types of enemies award more points than others, eg. defeating one god is equal to defeating 50 skeletons.
If you can defeat all the invaders before the timer reaches 0:00, you’ll win the Round!

Round 15 is designed as an endless level. Each time you defeat a wave of Hades, he will be resurrected in a stronger form – defeating him faster will increase the maximum score you can reach before the timer runs out!

Each Challenge Event will have a fresh Leaderboard, with prizes for the Top 100 when the Challenge ends!
Every Challenger will start with the same cities and resource points regardless of their player level, so resource optimization, tactical placement, and speedy reflexes will be required to reach the top!