Special Delivery: The messenger god has arrived! Read on to learn about Hermes and other changes in this update! 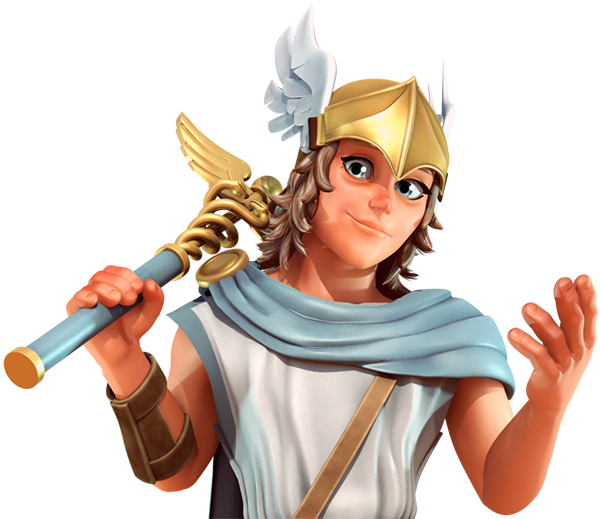 Strength:
Hermes uses his caduceus as a ranged weapon, with a maximum strength of 3189 at level 70.
He has the fastest attack speed of the ranged gods.

Speed:
Hermes moves faster than most gods, with a speed of 21.

Dash:
Rapidly attack all enemies in a target area. Hermes is invincible during this attack, and can move through buildings to reach his target.

Haste:
Add a speed boost and evasion chance to all allies within range.

Regroup:
Bring the gods back to Olympus to reorganize the attack. You can even swap your gods for a different lineup!

Alliance Power:
Summon Marathoners, very fast-moving melee troops with the health and strength of Hoplites. Careful, they can be charmed!

Temple:
Boosts the speed of all units. Maximum speed boost is 25% at level 40 (without Environment boost).

Houses:
Boosts the speed of units in adjacent buildings. Maximum speed boost is 15% per house at level 25 (without Environment boost).

Don’t miss your chance to try out Hermes in the upcoming Challenge Event!